We really like our equipment and we would like to play it all the time. Unfortunately, we are not in a position to carry all the equipment for all the concerts. At our concerts, you will usually hear only some combinations of instruments and amps, depending on how the space allows us. So far, we only take them all to concerts at the Brno Observatory and to open-air concerts.

The list is not complete, we will update it continuously.

A classic from the 70’s. HH electronics was one of the first to specialize in transistor devices. David Gilmour used HH to amplify the signal to leslie crates + reverb, Roger Waters as preamp. He also used it as a tremolo and distortion in the song One of These Days. Rick Wright then as a key amplifier. Of interest is the blue backlight of the panel, which was unique for its time.

Pink Floyd played on WEM pits almost all the time, and David Gilmour still uses them today. In our band you will find several boxes from this brand and among them this 50W combo. It is one of the good examples of classic WEM combos from the late 70’s. Inside, it is equipped with a pair of original Goodmans 12 “speakers, which co-create the typical round but concrete sound of WEM instruments. 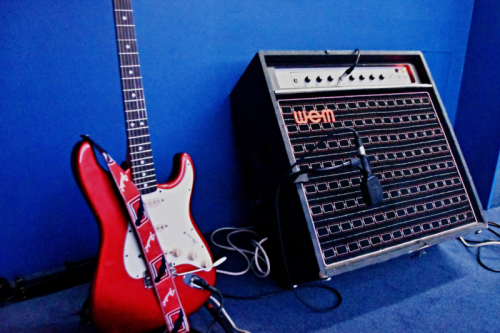 This combo together with Selmer T’n’B forms the basis of Syd Barrett’s sound on The Piper At The Gates Of Dawn. All-lamp, power 15W. The guitar input is only equipped with volume corrections and a tone aperture. The combo is equipped with a 10 “Elac speaker with high efficiency, two inputs and an electronic tremolo effect, very popular in the 60’s. The best, of course, plays properly melted. The advantage is extremely low weight and size.

Its more powerful version of the RA-200 was used by David Gilmour in 1976-83. You can hear them on the records Animals, The Wall and on Gilmour’s solo album called David Gilmour. This 200W leslie box from 1976 has three rotary speakers in the upper part, and four 12 ”60W stationary speakers in the main body. Leslie boxes in conjunction with the Hiwatt amplifier have been a key element of David’s sound for most of his career.

Pink Floyd used these all-lamp four-input amplifiers for the overall sound of the band, mainly for vocals, keyboards and drums. It was therefore a very powerful apparatus for its time. Syd Barret used the “Treble and Bass 50 W” model from the same manufacturer for the guitar. The same was then used by David Gilmour during the filming of Saurceful Of Secrets. The amplifier was manufactured in 1966.

Keyboard all-lamp amplifier from the 60’s.

If you think of your favorite David Gilmour solo, it’s probably the Big Muff you’re listening to. The distortion that produces that characteristic thick to violin tone has accompanied Gilmour from 1976 to the present. The history of this box dates back to the end of the 60’s and the connection has undergone many modifications since then. Gilmour plays primarily on the 1973 version of “Ram’s Head 3003”, but later used the Russian version of “Civil War” (on the Pulse tour). In our inventory there is a version following Ram’s Head, from 1976, however, guitarist Přemek stated at one concert that the replica Ram’s head plays a bit better on the pedalboard.

Classic phaser effects from the mid-70s, which were widely used for both guitar and bass and keyboards. Small Stone is equipped with 4 phasing cells, Bad Stone even has 6. Bad Stone was also the first phaser with feedback control and also contains a so-called manual mode, where it is possible to set the phase manually instead of using a low frequency oscillator. In our band there are two specimens of each type.

One of the most famous classic tape delay / echo effects at the time. It has been widely used in the UK and around the world.

A one-voice Japanese analog synthesizer from 1978. It has a so-called “semi-modular” architecture, which means that in addition to the usual signal path, we can also connect individual synthesis blocks with external cables, as was the case with old instruments in the 1960s. There is a huge range of sounds available, but only one specific color can be set at a time, so it has limited use for live performance and we only take it to concerts very rarely. 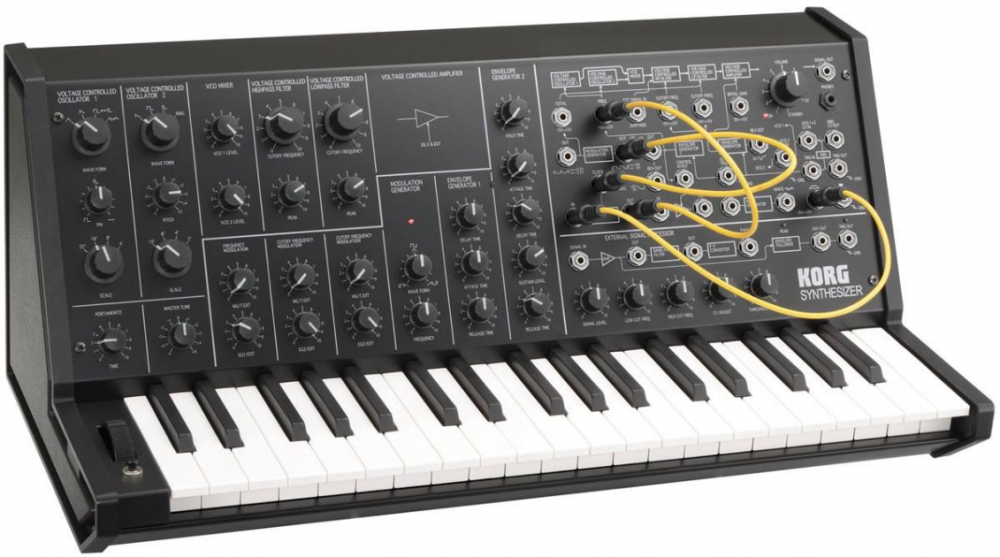 The Voyager is an improved version of the 1970 tool that Bob Moog began producing in 2001, and in addition to analog circuits, it has added a number of new features such as modulation, memory, dynamics and more.

String machine Crumar Performer with full polyphony, brass section and equalizer. In combination with the Small Stone phaser from Electro Harmonix, it forms the sound basis for the interassembly of the song Dogs. The instrument dates from the late 70’s.

In music reviews of Pink Floyd’s live performances from the first half of the 1970s (eg The Dark Side Of The Moon), you will read, among other things, very praiseworthy opinions on the overall sound of the band, which was a relatively unprecedented phenomenon at the time. At that time, the band used quite common HH amplifiers and WEM speakers, but instead of the ubiquitous Shure microphones, Pink Floyd bet mainly on the German company Sennheiser. Their famous series MD4xx, is widely used in studios to this day, MD421 is a classic for capturing transitions in drums, MD441 you know, among other things, from the Chamber of Deputies.